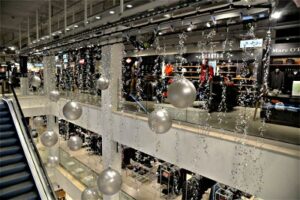 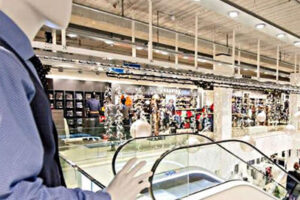 In 1845, “Au Bon Marché" opened its doors in the rue Neuve in Brussels. Later, “The Grand Bazaar" and “A l’Innovation", three family businesses, formed the Galeria Inno in the second half of the 19th century.

Galeria Inno has always been able to reinvent itself, as fashion does, to be in tune with the times and to constantly develop its unique brand space concept. In order to continually enrich the shopping experience, the pleasure of finding everything under one roof, Galeria Inno regularly transforms its stores.

Recently, Galeria Inno decided to open a new store in Hasselt, the capital of the province of Limburg. City of fashion par excellence, prestigious brands and shopping malls abound, not to mention the famous Fashion Museum. No better time and place than to build the sixteenth Galeria Inno store.

Galeria Inno wanted to give its visual merchandising optimal visibility, whether inside or outside the building. TRANSITIC therefore designed and installed two suspended conveyor systems for their new Galeria Inno store, meeting once again their concept of brand space and bringing a shopping experience inside the store.

At the opening on November 27, 2014, guests discovered right above their heads the technical feat imagined by TRANSITIC in synergy with INNO, highlighting the Christmas decorations suspended from the overhead conveyors.